Soya bean is a cream colored oval bean about the size of a common pea. It belongs to the Legume family and is native to East Asia. It is an important protein source for millions of people for over five thousand years.

Mostly Soya beans are yellow, but there are also rare varieties of black, brown and green. Main varieties grown in India are:

The Soya plant (Glycine max) was cultivated in China before 3000 B.C., and was classified as one of the five sacred crops. Soya was introduced in the USA in the early 19th century, the farming only expanded dramatically after World War II, when production in China was devastated.

Soya bean has been an important food ingredient of China, Manchuria, Korea and Malaysia over centuries. It is becoming increasingly popular in Europe and US among health and diet conscious people. 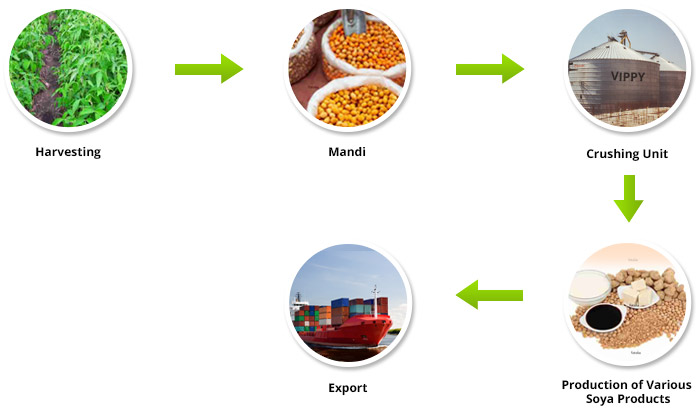 What Does Soya Bean Contains

Indian Soy Products are rich in protein content & are Non Genetically Modified (NON GMO). We consider GMO foods to be one of the most important issue the world is facing today. That’s why Vippy is proud to be a leading producer and exporter of the 100% NON-GMO Products. Read More