Vippy Group has a long, rich history. Starting with cotton trading and setting up of ginning & pressing facility in1922, the company has grown to become one of the largest soybeans possessing company in India.The foundation of what would grow to become the Vippy Group was laid in 1922. From its earliest beginnings in 1922 Vippy Group was a dynamic enterprise, distinguished by its clear vision and foresight. A program of controlled expansion and sound strategic policies allowed the group to move into a wide range of different fields.

In this series Vippy Solvex (currently known as Vippy Industries Ltd.) was established in 1973 as a Pvt. Ltd. company by Mr.Vimal Chand Mutha & Late Mr Prakash Mutha. The visionary entrepreneurs and committed philanthropists, Mr. Vimal & Mr Prakash Mutha helped pave the path to industrialization in Central India by seeding pioneering business in Soya sector. It was more than a company that was born in 1973, a legacy was born. A modest beginning for a company that was to grow into India’s one of the largest Soya processing company. Vippy industries Ltd is the pioneer in soya processing industry in India. The first processing plant was of 60 MT/day capacity and currently the combined crushing capacity is 1800 MT/day. Company went for IPO in 1986 and converted into public Limited Co.

Today Vippy is a rapidly growing business group based in Central India with significant international business. The Vippy name has been respected in India & overseas for more than Four decades because of its rich history and adherence to strong values & business ethics. 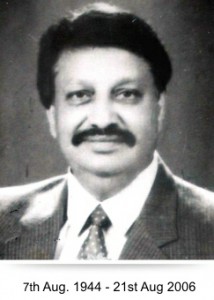 Our respected Founder and Managing Director Shri Prakash Ji Mutha was an exceptional human being and an outstanding leader. A man far ahead of his times, he epitomized the dauntless entrepreneurial spirit.

From a modest beginning in 1973 with 60 TPD Extraction Plant, he continuously expanded the capacity & product range to 1375 TPD three solvent plants, 100 TPD Oil Refinery & other down stream products. He had the vision & passion to bring in most advanced technology & latest plant & machinery with focus on reduction in operating costs.

Even when the Company faced a difficult period from 2000 and was referred to BIFR, he encouraged the Vippy Family to struggle hard with confidence, courage and an unrelenting commitment to the goal of retrieving the Company from the hard times by stepping up production.

Despite his immobility, due to the Motor Neuron disease, he never failed to attend office and was always available for guidance & support. He worked till the last day & lived by the Motto – “Work is Worship”.

He was awarded ‘Udyog Patra’ by Hon’ble Vice President of India Shri B.D. Jatti in the 1978.

He was also, awarded outstanding young Industrialist of Madhya Pradesh in 1983 by Jaycees.

He was instrumental in establishing Association of Industries Dewas and served as President & Chairman of AID. Many projects of immense value were initiated under his leadership and were successfully completed. Major projects which are witness to his perseverance are The Narmada Water Project, GAIL GAS Pipe Line and the Aside Scheme for infrastructure development of industrial area. He worked with his colleagues at AID to build Dewas as a Leading Industrial Township of India.

He was always available for all social causes through Lions Club International and held various positions in the same. He donated blood over 100 times.

We were fortunate to have him to lead the Company for over 30 years. His obsession for perfection, humanity, prodigious capacity to motivate & trust people, endless patience & courage, concern for his team, strong willpower & fighting spirit, vision, will continue to guide and inspire future generation at Vippy. We are proud & privileged to inherit this invaluable legacy.