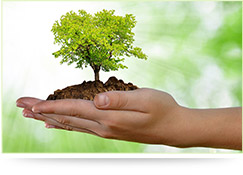 The world faces huge challenges in meeting the food, water and environmental demands imposed by a growing population projected to reach 9 billion by 2050. Moreover, these demands must be met in an economically viable and sustainable fashion that preserves biodiversity and health.

Non GMO Soya production is a favorable and environmentally sustainable source of protein that use less water, less fertiliser, produce less carbon dioxide and that are produced more efficiently.

We at Vippy ensure the sustainabilty at each level in processing value added Soya Products and continiously working towards our goal that protect environment and the people.

Vippy believes in the harmonious coexistence of humans and nature, and deeply recognized the precious value of renewable resources in the nature, which must be utilized scientifically instead of disorderly.

We also believe that Mother Nature has created the best thing to protect the healthiness of mankind. With this understanding of health and nature, Vippy has always been devoted itself to the optimization of techniques since its establishment.

Soy uses far less water than other animal-derived proteins such as milk, meat and eggs. This has the effect of saving over more than four million gallons of water for each ton of soybeans produced.

At Vippy we have learned that water is a necessity for all industrial production. In turn that means water must be protected, conserved, and used in a proper manner. We thus ensure optimum usage of water. We are actively persuing rainwater harvesting & water recharging since more than last 20 years.

A fundamental way to examine the environmental cost of food production methods is to evaluate the total energy use involved in production. Soy as a protein source is considered to be one of the efficient protein source based on return of energy use.

At Vippy, we prefer low energy consuming processes over the processes which use intensive energy. We are using solar water heating system to pre heat the water that goes into boiler for regeneration of steam. Since in India we enjoy sunshine throughout the year; solar energy is the most efficient source of energy. We also reduced electricity consumption by switching to LED lights and highly efficient electric motors in our production facility.

Indian Soya is sustainable from an environmentally sustainable perspective. Indian soya is not grown or likely to be grown in HVCAs – high value conservation areas – meaning jungle, wetlands, savannah etc which impact upon the environment or fauna. Therefore there is no forest destruction or pressure on the environment on raw materials sourced to manufacture our products.