Lecithin is a naturally occurring group of phospho lipids found in every living cell. Though the name Lecithin is derived from the Greek Lethikas meaning “Yolk of an egg”, Soyabean is the commercial source of Lecithin.

Vippy NON GMO Soya Lecithin is obtained by dehydrating and cooling of Gums from Soyabean Oil (derived from ‘NON GMO’ soybeans). The addition of water in Crude Soya Oil Hydrates the phosphotides making them insoluble. These are dried with Soyabean Oil and fatty acids to produce good Lecithin. 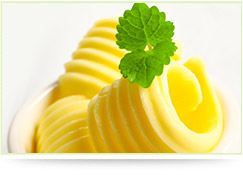 Hydrolized NON GMO Soya Lecithin is an oil-in-water (o/w) emulsifier as opposed to regular or native lecithin, which promotes water-in-oil (w/o) emulsions.
Most of the performance benefits of soybean-based lecithin come from the unique hydrophilic and hydrophobic surface active properties of phospholipids, their primary component. Hydrophilic (water-loving) and hydrophobic (water-repelling) properties enable lecithin to make stable blends of materials that otherwise do not mix easily and tend to separate.

It is used as an emulsifier or stabilizer in manufacturing variety of food products, cosmetics, pharmaceuticals, health care and among various other applications.